I have visited several of the Giffords shows over the years and I have often thought it would be a lovely thing to photograph. The opportunity arose last year during our long, hot summer so I ran away with the circus! I spent seven days with Giffords Circus over the Summer capturing images whilst the team were relaxing between shows but also taking shots of rehearsals, preparations and backstage during the show. Occasionally I also sat in the audience during the show but this wasn’t predominately what my project was about.

The circus is visually stimulating with the contrast between the show and behind the scenes. I wanted to set myself a project that wasn’t lead by a brief so I had the freedom to let the project develop and capture whatever peaked my interest. I have always enjoyed editorial work and capturing images of makers, creators, producers and performers. Photographing Giffords during their tour across the English countryside enabled me to almost become part of the ‘on the road’ experience.

For anyone who has visited Giffords there are several instantly recognisable faces. Nell Gifford founder & creator of the circus is an inspiring person to meet. From the initial idea of the circus & buying their first tent in 2000 to developing the wonderfully creative, otherworldly show that you see today. Entertaining millions of people along the way & inspiring in many the dream of running away with the circus.

Tweedy the clown is one of the most naturally funny men I have ever met, sometime I was crying with laughter behind the camera whilst trying to focus! Tweedy can just turn it on when a camera is pointed at him and that was just a joy to photograph. I felt that the images I captured over my project were of the man himself, behind the greasepaint so to speak. I shot images of him practicing, he dedicates so much of his time each day honing his already impressive skills (the sound of Tweedy blowing his trumpet resonating across the fields!) and spending time with his family who were on the road with him during the school holidays.

Nancy is brilliant on and off stage, she has an amazing face and so much life to capture. Anyone who has ever seen Nancy in a Gifford show knows that she gives her all on stage. Right from the start one of the images I wanted to capture was of her right after she came off stage without touching up her make up, in colour, raw look at camera, sweat and mascara running! This confrontational image capturing the essence of performance, this has ended up being one of my favourite images of the project.

Right from the start of my project I wanted to capture the essence of life of the circus behind the scenes. Taking the mask off the performers and capturing them as real people. A good example of this is the gent who along with his family launches himself off a see saw across the circus ring, during the day he is playing chess and drinking the strongest coffee imaginable.

I will always have fond memories of my time with Giffords. From the moment I met someone at the booking office at Daylesford, how welcoming everyone was from the performers, the behind the scenes staff, Nell and her children and all of the administrative staff when I met them. The circus looks idyllic wherever its sits but I have to say as it sat in the Chiltern Hills in the beautiful Stonor Park it looked spectacular. It was certainly well worth the walk up the hill to get the shot. Caravan life is a strong memory that will reside with me for years to come, the performers back at their caravans, resting, cleaning their kit, making clothes, playing games and musical instruments.

Please step into the wonderful world of Giffords Circus & view my images taken during the long, hot summer of 2018.

All of the images that appear in the our Giffords Circus gallery are available to purchase as limited edition prints.
Each print is a limited edition of 25.
Please click on the button below to view the purchase gallery. 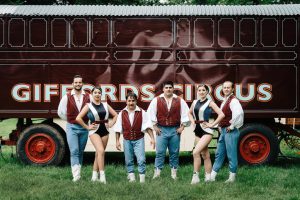 Giffords Circus was due to hit the road again in Summer 2020 with their 20th anniversary show ‘The Hooley’ but only a few days into rehearsals the world was closed due to Covid-19.

All being well they will be able to start rehearsals again in the spring & will be able to take ‘The Hooley’ on tour this year. It certainly isn’t summer without taking in a Giffords Circus performance. 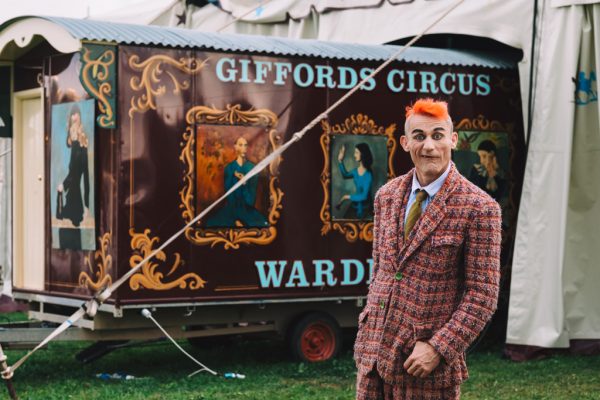 Mark has also worked on a book with The Orange Bakery. You can view his work on the Breadsong Bakery Book by clicking here.

To find out more about Giffords Circus please click here

If you’re looking for a commercial photographer in Oxford for anything from architectural photography and corporate headshots, to mouth-watering food photography and breathtaking images of your garden, we’d love to hear from you.