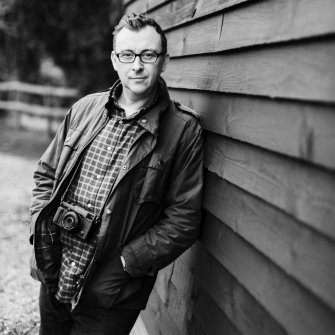 My friends and family would say that if you sliced me in half I would have photographer written through me like a stick of rock! Since I first picked up a camera aged 8 it’s been a life-long love of mine. I was lucky enough to grow up in Cornwall and would spend my weekends photographing the landscapes & people of my home county. It also meant that I was close to the prestigious Falmouth College of Arts where I achieved a BA Hons in Photography in 1999.

After graduating from Falmouth I moved ‘up country’ and worked within the influential family portrait brand Venture in one of their flagship studios in the picturesque market town of Marlow where I was Style Director. After leaving Venture I was approached to assist in the set up of the next generation of portrait studios Imagine which was in the beautiful Wiltshire countryside. Never one to turn down an opportunity I took to this task with great gusto whilst also launching Lord & Leverett as the ones to watch in the field of wedding photography. Lord & Leverett broke the mould of traditional wedding photography and offered a new and innovative approach producing natural and exciting images of the big day. I was thrilled when this approach afforded me the exalted award of Wedding Photographer of the Year for the UK 2005 amongst many others.

I have been working as a solo photographer for seven years concentrating on people photography – Editorial, Weddings, Family Portraits, Business & Artisans.

The last seven years have been a whirlwind of weddings, success & lots of photography! I am very proud to be the Official Photographer for The Princes Countryside Fund. My work regularly appears in Waitrose Magazine, featured on the cover of The Sunday Telegraph Country Week supplement & has appeared in many other publications.

In 2017 I was thrilled to have two images in the finals of The Pink Lady Food Photographer of the Year, with one image in the Food in the Field category receiving Highly Commended.  I entered the competition again in 2018, 2019, 2020 & received Highly Commended for my images ‘The Matriarch’, ‘Fish & Chip’ & ‘Friday Morning Market, Thame’

With this ever-increasing success I am in high demand & with the expansion of the business I was joined by my wife Becky in 2014. Becky uses her experience of Picture Framing & as an Art Gallery Manager to offer all clients at Mark Lord Photography an exemplary level of customer service.

· British Institute of Professional Photography Pet Photographer of the Year

· Finalist in BIPP wedding photographer of the year